In the Fall of 2015, as I was floating and fly fishing on the Madison River outside Bozeman, Montana with my fishing guide friend Mike Mansfield and the topic of an international fly fishing trip arose. It seemed like a no brainer idea. As we cast for brown trout that day on our home river, dreaming while weighing the pros and cons of such an endeavor quickly got us thinking seriously about it. It had been eight years since I had last left the country to backpack, fly fish and travel around South America with my brother Eric. Those types of trips that put you outside the familiar and one’s comfort zone tend to always be life-changing.

“Once the travel bug bites there is no known antidote, and I know that I shall be happily infected until the end of my life” – Michael Palin

“The bite of the travel bug,” a saying that often is reiterated on the backpacker trail holds a lot of truth. I know both my brother and I felt it. Alas, as we returned to the states from our 2008 six month trip and reintegrated into our domestic life, it was a feeling that never quite left us. My brother Eric would go on to be a bush pilot in Alaska while I would continue on to pursue my career as a photojournalist in newspapers throughout the American West supplemented with weekend fishing trips throughout Northern California, Oregon, and Montana as my escape from the daily grind.

Fast forward to last Fall, I had since left the newspaper life behind me and was two years into running my own photography business in Bozeman, Montana. Having just finished up my busy season of photographing weddings, portraits and a steady run of commercial work and assignments for national environmental non-for-profits, the sudden suggestion of another international fly fishing trip seemed like a damn fine idea and one to take seriously. Eight years had been too long of a hiatus. Further brainstorming of how we could pull off such a trip ensued. It just so happened that Mike had recently met up with a local guide friend of his that was running a fly fishing operation called Mongolia River Outfitters in remote Mongolia and suggested we look into making a trip a reality. I had never been to Asia before and though the thought had crossed my mind to venture to that part of the world, all too often the excuses and reasoning for not going due to career or other distractions has always got in the way of pursuing that dream trip. No longer.

As luck would have it, the outfitter friend of Mike’s was in need of revamping his photography for his fishing business operation and upon further discussions and conversations, he decided to hire me to document the experience. It was settled. We were going to Mongolia in the Fall of 2016. Let the trip planning begin.

Over the course of this year, we were able to amass a small crew of able fishermen friends to join Mike and I on this trip of a lifetime to pursuit one of the largest salmonid river fish in the world called taimen on a fly rod. It wasn’t exactly a hard sell. Traveling abroad to explore nearly eighty miles of the pristine Onon River in the remote Mongolian countryside near the birthplace of the legendary ancient Mongolia Emperor Genghis Khan. Ummm…Yes, please. We would be floating through the world’s first Taimen Sanctuary and cast for taimen, lenok, and trout on a fresh stretch of river every day while staying in a well-appointed ger camp every evening. Remote wildness cushioned by an authentic Mongolian camping experience. This was going to happen and as the months wound down to our departure date, we could barely contain our excitement.

The plan was to fly from Seattle, Washington to Beijing, China then board a plane to the capital city of Ulaanbaatar, Mongolia. As with any big trip overseas, visas had to be applied for, our passports renewed and our gear for the trip packed up. At last our departure date had come.

After making our 18+ hour international flight on Hainan Airlines, we arrived at the Beijing airport. It was there, exhausted and in total culture shock, where we encounter our first hiccup of the trip. The Chinese version of TSA employed what appeared to be a bunch of fresh out of high school young adults. We got held up at the security check due to the numerous “suspicious” fly rods we were hauling and had to argue for them not to be confiscated as dangerous carry on items. There was a lot lost in translation and we were unwilling to have the rods (expensive and essential to the fishing trip) leave our sight. As a compromise with the Chinese authority, we took shifts guarding our precious cargo at the airport police station for the two hours until they could escort us with our rods to our connecting Mongolia flight. During that time kill, Mansfield took out his Orvis fly rod to show them what was in the metal transport tubes. He may have even made a sale to a passerby Chinese fisherman. The reasoning of our Chinese customs agents was questioned quietly amongst our group numerous times as we watched other international travelers make it through security with their fishing rods with no hassle. I guess we were special. They say it isn’t an adventure until something goes wrong. We swallowed our frustration and made the most of it.

Eventually, we made our way through the Chinese red tape and made our flight to Ulaanbaatar. Located in central Mongolia, the city of Ulaanbaatar has a population of over 1.3 million people and accounts for almost half of the country’s total population. Its history is a complicated one. Originally, it was set up as a mobile monastery-town at its peak having upwards of 20,000 practicing monks and as per tradition in Mongolian nomadic society, the city’s physical location changed dozens of times throughout the centuries as supply and other needs would demand. The city served as a cultural and commercial center. It would go on to be a midway point on trade routes between China and Russia with populations and government control from outside Chinese and Russian forces fluctuating throughout the ages. By the early 1920s, the country had fallen completely under Soviet Russia and it wasn’t until the year 1990 that opposition parties and numerous protests of citizens allowed the country to be free of their Russian rule. The city is now on the rise to be the new hub of 21st-century establishment within the country. The Soviet influence on the city can still be seen today. A mixture of tired old concrete soviet buildings intertwined with Mongolia ger camps. Driving through the city was to bare witness to some of the worst dysfunction of modern day traffic. Fender benders and car crashes seemed to be a norm for the locals and obeying street lanes and traffic lights appeared to be optional. To say the least, it isn’t the shiniest of cities I have ever visited but as we discovered on our 24-hour layover it did hold some gems.

The thought of having to juggle and coordinate the travel arrangements of five fishermen seemed like one hell of a hassle, so prior to leaving the states we opted to hired a travel agent to book our flights, hotels and even get us a travel guide for the times we would be in the city. We would have a day in the city to decompress, take in our new surroundings and explore some of the sights. The morning after our late night arrival, we met our guide Nana, a young Mongolian college girl who would be escorting and showing us some of the sites around the city. After breakfast at the hotel, our tour guide took us to The Gandantegchinlen Monastery, a Tibetan-style Buddhist monastery in Ulaanbaatar. In the 1930s, the Communist government of Mongolia, under the influence of Joseph Stalin, destroyed all but a few monasteries but thankfully spared the Gandantegchinlen Monastery. It reopened in 1944 and has continued as the main functioning Buddhist monastery as a token homage to traditional Mongolian culture and religion. With the end of Marxism in Mongolia in 1990, restrictions on worship were lifted and the site now receives quite a number of local visitors and tourist today. The Tibetan name translates to the “Great Place of Complete Joy”. It was pretty cool. Over 150 monks take up residence here and their chants could be heard as we approached the steps. Here I found some locals lighting prayer candles and the main attraction, the Avalokiteśvara, the tallest indoor statue in the world at 26.5-meters-high. Russian troops dismantled the original statue in 1938. After the end of the Soviet era, the statue of Avalokiteśvara was rebuilt in 1996, funded by donations by the Mongolian people. It was quite impressive.

As our day continued we sampled a Mongolian BBQ restaurant for lunch and spent the remainder of the afternoon resting from our long flight and preparing for the start of our fishing mission. Early the next morning, we met our additional travel companions for the fishing trip, a Texan and two brothers from Australia and boarded a small plane to fly two hours northeast into the remote Mongolia steppes towards our home for the next week, the pristine Onon River. -M 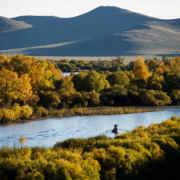 The Weekend Fish Mission on the Madison and Yellowstone River

Steelhead Fly Fishing on the Trinity River in Northern California

Kicking Off the New Year

Winter Steelhead Fishing on the Rogue River in Southern Oregon

A Soggy May in Montana
Photographing Taco del Sol in Bozeman, Montana

Fly fishing Mongolia – On the River with Mongolia River Outfitters –...
Scroll to top