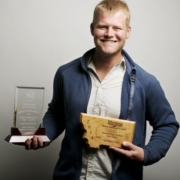 I recently learned that a couple of photographs I made for the Bozeman Daily Chronicle last year were recognized by the Society of Professional Journalists and the Montana Newspaper Association. I won first place Best Sports Photo by the Society of Professional Journalists for a photo I made of a MSU Heptathlete doing the high jump in the NCAA Indoor Track Finals and another first place from the Montana Newspaper Association for Best Feature Photo which was of a young mother tending to her kids in the early morning before work. The full story about their family can be found here. As a personal project I was pretty stoked that one below got the nod from my professional peers. As a whole my employer the Bozeman Daily Chronicle won numerous awards including best newspaper in the state. The full article is posted here. Congrats to my fellow reporters, editors and designers on a great year of public service. My winning images are below. Thanks for looking, -M Here we go. Another year in the bag. I feel thankful. The year 2013 was another year of positive growth though at times I fought it kicking and screaming. The evolution of my photography continues and my love for Montana continues to grow. I’ve really been enjoying life here in Bozeman, Montana. Here are some favorite images from 2013. Looking forward to the new adventures of 2014. Happy New Year everyone! -M

Fall has arrived in Montana and I have been loving it. It is easily my favorite season. As you can see it is also very busy. I’ve been having fun. Here are some favorite photographs from assignments I did for my staff position at the Bozeman Daily Chronicle during the month of September. Thanks for looking. -M

Last week I photographed some of the activities around town that were giving appreciation for Native American Heritage Day. It was a chance to recognized all of the diverse tribal nations both here in Montana and throughout the country and that unified idea to uphold their native cultures was shown in the multi tribal dancing outfits and teachings to the public. You couldn’t ask for a better weather day. I hung around Montana State University watching fancy dancers, listening to speakers, listening to native music and then ventured over to Chief  Joseph Middle School to watch kids learn to put up teepees. Ingredients that made for a fun day in Bozeman and for a festive Sunday Viewfinder photo page in the Bozeman Daily Chronicle. -M

For weeks now, word has been spreading quickly throughout town that members of the Westboro Baptist Church, a outspoken anti-gay religious group, would be picketing at both the Montana State University campus and the Bozeman High School this past Monday. Bozeman is a small mountain community but their response to such a group was a monstrous, united message that intolerance has no place here. This was shown in spades as the racist family of three from Topeka, Kansas got out of their white SUV and were immediately drowned out by a sound wall of hundreds of marriage equality supporters. As a member of the media, these are tricky subjects to document. While my job is to document and tell the story as accurately and as un bias as I can, the reality is I strongly disagree with the message these people were trying to push. So my challenge was look past my own opinions and try to make images that would tell the story while minimizing my spread of their message by showing their hate signs. It was an exercise in observation, patience and careful composition. Being able to remain calm during such chaotic situations (where many things at once are happening), helped me see beyond what was on the surface and perhaps show something unexpected. The first image in this slide show I think really spoke to that notion. As both sides screamed at eachother, I stopped and watched as the couple’s 11-year-old son. He stood there alongside is parents hiding being his sign with the world screaming all around at him. You could tell by his face that he was incredibly uncomfortable. I wondered what was going through his mind and whether he ever doubts his parents intentions? Who knows? Seeing his reaction so different from his outspoken parents struck me that maybe there was some hope for him. There are lots of things in this world that I don’t agree with and many people who can say things that can make my skin boil. But despite my disagreements, I appreciate that we live in a country where an individual can speak their mind for better or for worse. I was proud to see my community take a stand. -M

A sampling of some favorite images from the past month working at the Bozeman Daily Chronicle.

Another fun month has come and gone. Here is some recent work from my staff photographer position at the Bozeman Daily Chronicle. Happy 4th of July everyone!

I had some fun making these photos. This past weekend, as part of my newspaper‘s monthly photo page called the “Viewfinder” I decided to pack up the photo studio and bring it over to the Gallatin County fair grounds this past Saturday and make portraits of Bozeman locals and their new old bicycles. The Viewfinder can be anything. It really gives us photographers a chance to get creative and do photo studies. It’s an opportunity and  challenge I look forward to. But sometimes it can sneak up on us due to the busyness of the daily newspaper. Combing the events calendars looking for ideas, I stumbled across an add for the bike swap being hosted by the Gallatin Valley Bicycle Club. Bingo! I remembered how excited I was as a kid to receive my first bike. It was a feeling of freedom and independence. A simple machine that would serve as a reliable companion accompanying me on countless adventures throughout my youth. Waking up early on Saturday morning, I set out to try to capture that feeling in a well lit portrait series. These are the results. Thanks for looking,  -M

April 24, 2013/0 Comments/by Mike Greener
Mike Greener http://mikegreener.com/wp-content/uploads/2019/05/MGlongColorGreyTree.png Mike Greener2013-04-24 21:53:532013-04-24 21:53:53Portraits from the 2013 Gallatin Valley Bicycle Club’s Bicycle Swap
I’ve been excited to post this project for a while now. Over the past six weeks, I documented the journey of a young couple who just had their second child here in Bozeman. I was looking for a long term photography project. Something that would challenge me to slow down and really tell an in depth story through pictures and sound. Upon meeting Rosie, the sister of Knikka (the mother) at the Bozeman Film Festival, I was able to introduce myself to the rest of the family and get the okay to start documenting their lives. It started sooner than expected. That night Knikka went into labor and I met her and Chris at The Birth Center in Bozeman, Montana at 1:30am to watch their new daughter Ryleigh be born. What an amazing thing to witness…the birth of a child. I began this project because overall I was drawn by the sense of family these guys all had. Rosie had just flown out from Connecticut to help her sister and her husband Chris become adjusted to life with a 3-year-old and a newborn. For the parents, Knikka and Chris, it was balancing the needs of their children while juggling their own relationship. Each are working on their degrees while attending college at the Montana State University. The running theme in my head was “It takes a village to raise a child.” I had many different facets to document and I put no limits on myself. I also had no agenda or a deadline. This was a different approach to storytelling that I am used to documenting. So much of what I do at the newspaper is rush around making deadlines. The growing trend of small editorial staffs, budget cuts and big workloads prevent us from doing more of these in depth documentaries. This was a intimate, personal story. One with no clear end or direction in sight. Having a family isn’t anything new. There weren’t any big news hooks to it. It was just their story and their life. A story I felt was worth telling. Through the countless hours I spent watching and documenting this family, I came to learn a lot about them and realized there path in life could easily have been a very different darker one. I focused my approach on telling the journey of the parents Chris and Knikka. I wanted to show how their unexpected journey into parenthood changed them, derailed their previous path of substance abuse and switched course to give their kids the best life they could give them. This multimedia video is the result. I hope you enjoy it. -M
-To read the story and see more photos you can view them on the Bozeman Daily Chronicle website.

I’ve been in Montana for a little over a year now after moving here from California. While the normal routine in the past was for me was to always bring a camera out on my fly fishing missions, for 2012, I decided to take a break. I’ve stayed pretty busy at the newspaper throughout the year and my weekends became my place to get out and step away from it all. I wanted to be totally present and just study my new Montana surroundings. Also, I was too busy having fun fishing myself to set my rod down and make images. This past weekend I got after it, fishing two days in a row – one on the Madison River with my buddies Jimmy and Camille and the second floating the Yellowstone River with my buddies Sky and Ryan. The decision was made to bring along my camera. While I primarily fished throughout the weekend, I did manage to snap a couple pictures and even got the big brown trout I caught documented on camera (thanks Ryan for taking the picture). Look for more fly fishing photos throughout the year. The fly fishing photography hiatus is over. I’m ready to start documenting the Montana rivers again. Here we go. -M

Happy New Year everyone! I ended my 2012 on a high note and have been working hard to keep the momentum going into the new year. As always, I’m looking for ways I can develop and grow in my photography and I hope to improve on some things for the new year. So far so good. Here are some of my favorite images I’ve made so far in 2013. Thanks for looking, -M