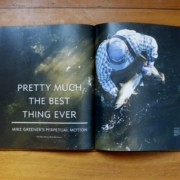 I’ve been wanting to share this post for months now. With permission from the Flyfish Journal, I wanted to reprint the article they recently featured on me and my fly fishing photography. Here is the story my friend Ryan Peterson wrote about me. What an honor to be featured in such a beautifully designed nationally printed magazine. I even had a photographer friend tell me he found a copy of it while on a cross country flight to Singapore. Pretty cool. I know many of you probably didn’t have access to check out the actual magazine while it was on newsstands so I wanted to share it here. Thanks for the continued support everyone! Cheers, -M

“I started my flyfishing photography in the trenches, documenting trout bums who slept under bridges and carried fish back to camp in their waders to cook for dinner with a Bic lighter,” says Bozeman, Montana-based photographer Mike Greener. While this sounds remarkably like a fishing story, Greener’s camera doesn’t lie. Through his lens we glimpse the color, grit, grandeur, excitement, silence, humor and myriad personalities that exist in today’s flyfishing culture.

If the formula for successful photography is talent combined with insanely hard work, it’s no wonder Greener is at the top of his game. We’ve spent many days together on the water over the years and the one thing is certain: his work method is intense and straightforward. He is a perpetual-motion machine. He’ll swirl around a scene, looking for the perfect combination of light and subject and then lock on point when the dots connect. And her shoots constantly. “I don’t even hear the shutter anymore,” he says.

Sometimes his picture of the day pops out unexpectedly from a thousand others. Other times it is the result of a pre-visualized idea along with painstaking setup and repetition. Case in point: One of the most bizarre things I’ve ever done was stand in a river at dark in February and cast over and over again directly at Mike. Behind me, gazillion-candle-power floodlights turned night into day for 1/500th of a second as he fired the camera on every cast. This went on for hours. Frost blanketed everything. I was freezing; Greener was completely stoked.

Greener’s compositions eschew flyfishing trophy glory and pretty riverscapes, instead seeking, as he says, “to tell the story of how this person got to this point where he or she could battle and land an awesome fish.”

A background in photojournalism–he studied at the University of Montana and then worked for newspapers in the trout capitols of Redding and Bozeman–lends itself well to his documentary sensibility, drawing us into wonderfully spontaneous and intimate moments. The result is a style distinct within modern flyfishing photography. Greener’s pictures are sometimes strange often stark, and always full of surprise, brilliant light and the familiar feeling that flyfishing is pretty much the best thing ever.” – Ryan Peterson, for the Flyfish Journal 5.2 winter issue, 2014

I checked the mail the other day to find that the newest edition of The Flyfish Journal issue #3 has been published. It’s exciting because I had another one of my photographs published as a double truck in the opening spreads. I’ve been with these guys from the beginning and I am anxious to see where they take it next. These guys are rewriting the definition of the fishing magazine at a time when the industry and magazines in general are in a state of flux. The magazine has coffee table quality printing, is well written and has excellent photo play. I have yet to find another venue that displays my photos so well. You can check the magazine out for yourself here or find it at any major publication store like Borders or Barnes and Noble. Sweet.